With fertile soil and wide-open spaces, the state of South Dakota has attracted people for centuries. In the early 1800s, the Sioux Indians dominated the area, but the discovery of gold led to a rush of settlers. Today, the people of South Dakota are accustomed to their rural lifestyle, but visitors won't have to look too hard to find things to do in the state's cities. Art festivals, theater events and music-themed gatherings are just some of the many events that dot South Dakota's cultural calendar. 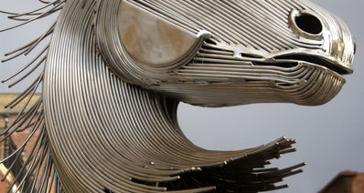 Sioux Fall's downtown district is the scene of many events each year. In the summer, <a href="http://sculpturewalksiouxfalls.com/">SculptureWalk</a> shows off amazing sculptures spread along the city streets.

The jewel of South Dakota's outdoor attractions is Mount Rushmore , located in the Black Hills region of the state. This gargantuan sculpture, carved out of the side of a mountain, pays tribute to four important figures from American history: George Washington, Thomas Jefferson, Teddy Roosevelt and Abraham Lincoln.

The Crazy Horse Memorial , another mountain sculpture currently in progress, offers a similar take on a different historical figure. This sculpture depicts Crazy Horse, a Lakota who took up arms against the federal government in the late 1800s.

South Dakota is also home to a variety of purely natural attractions, including Badlands National Park . This national park is home to bison and fascinating rock spires and buttes. South Dakota's second national park, Wind Cave , is made up of prairie lands and a cave complex. In the cave, visitors can find calcite formations known as boxwork.

Visitors can finish up their outdoor treks at The Mammoth Site near the city of Hot Springs. During the Pleistocene era, the remains of prehistoric plants and animals became trapped in a sinkhole, preserving them for future generations to see. In the site's museum, visitors can marvel at mammoth skeletons.

Sioux Falls, the state's largest city, is home to a number of exciting attractions, including Falls Park , a park with plentiful waterfalls. The Sertoma Butterfly House and Marine Cove , also in Sioux Falls, gives visitors a chance to see delicate butterflies close up and learn more about marine life.

Top destinations for this weekend!